Rhythm of Love: In conversation with Sungti Alinger 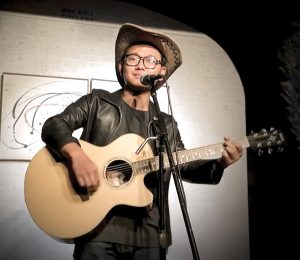 An upcoming musician from Nagaland, Sungti Alinger released his debut cover of  ‘Your Man’ by Josh Turner on YouTube and later on Facebook. This has earned him recognition and listeners are carried away by his deep manly vocals. Alinger,  who has keen interest with the country music genre, is greatly influenced by country singers like Don Williams, Josh Turner, Jim Reeves and Kenny Rogers to name a few.

Many have dubbed Alinger as the Don Williams of Nagaland and he wishes to write lyrics soon!

For those who haven’t heard this young lad sing, it’s time to go ‘Country’ listening to his debut cover (Josh Turner – Your Man – Cover by Sungtimen Alinger)

Rhythm of Love shares an insight with the upcoming artist.

Eastern Mirror: Please introduce yourself to those who haven’t heard of you yet?

Sungti Alinger: Hi… I’m Sungti Alinger. I am just an ordinary normal guy who loves music, singing, playing games and sports and to play pranks on my friends as would a normal teenager.

Eastern Mirror: Any interesting story behind your involvement and love for music?

Sungti Alinger: Just like any other guy I took to a liking music through the influence of the church, and my aunt (dad’s sister) who bought me a guitar when I was about 9 or 10 year old, and that sparked my interest to play the guitar and learn to sing.

Eastern Mirror: Your debut cover song ‘Your Man’ by Josh Turner  shared on various social media platforms have hit thousands of likes and dozens of shares. What was your reaction to it?

Sungti Alinger: On an impulse, I decided to record a song by Josh Turner titled “Your Man” which was recorded at the Clef Ensemble Studio Kohima, the proprietor of the Studio Alfred was kind enough to upload it on the studio’s Youtube Channel, that was overwhelmingly appreciated and liked by many, and on my request Chuba CJ popularly known as Kishore Kumar of Nagaland promoted by sharing my music video on his Facebook timeline which was also overwhelmingly appreciated, for which I’m truly humbled and thankful.

Sungti Alinger: As mentioned earlier, a great deal goes to my aunt (Mrs Sashimenla) having bought me a guitar that awakened my interest and love for music, apart from this a great deal goes to country singers like Don Williams, Josh Turner, Jim Reeves, Kenny Rogers, the list goes on and on.

Eastern Mirror: Apart from singing and studying what else interests you?

Sungti Alinger: Apart from singing and studying, I love to stay at home helping out my parents with the household chores, hanging out with friends and to work out at the Gym.

Eastern Mirror: Where do you see yourself ten years from now?

Sungti Alinger: As the old adage quotes “ Man proposes God disposes” I leave everything in the hands of God although I’ve got so many things in mind and practice makes a man perfect I plan to put my best effort in everything I do, the rest I leave unto God Almighty.

Eastern Mirror: What do you wish to communicate through your songs?

Sungti Alinger: Music transcends every barrier. Hate to Love. War to Peace. Make Love not War is my motto.

Eastern Mirror: Best advice ever given to you?

Sungti Alinger: The best advice ever given to me was by my parents, my mom and dad who I adore. “Never give your word, unless you mean to keep it” for which I’m grateful to them for whatever I am today.

Sungti Alinger: He stopped loving her – By George Jones

Your Man – By Josh Turner

I can’t stop loving you – By Jim Reeves

Eastern Mirror: When can we expect your debut original release?

Sungti Alinger: As I’m a student (currently pursuing Bachelors degree) I don’t get enough time to write or compose, but I’m trying my level best to come out as soon as possible, God willing.