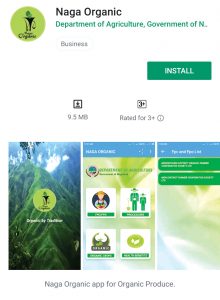 Dimapur, Aug. 20 (EMN): Minister for Agriculture and Cooperation G Kaito Aye on Tuesday launched the ‘Naga Organic’ app developed by the department of Agriculture and Horticulture in collaboration with the IT department, according to a DIPR report.

The app provides details about Farmer Producer Company/Farmer Producer Organisations (FPC/FPO) related to their ‘organic produce’ in various districts of Nagaland. It also functions as a platform for the FPC/FPO to get in touch with the buyers directly, without the involvement of middlemen.

Aye launched the app during an ‘outreach-cum-buyer/seller meet on organic food production in Northeast’ organised by the Indian Chamber of Commerce in collaboration with the state’s department of Agriculture department at Hotel Japfu in Kohima on Tuesday.

Aye said that the event was an initiative to promote Agro-based farmers of the state. He added that the state government is trying its best to make Nagaland an ‘organic state.’

“To facilitate stronger marketing access under the ownership of growers’ organisation, government of Nagaland has registered the brand as ‘Naga Organic.’ The FPOs and entrepreneurs under the mission have started selling their produces and products under this brand,” he said.

According to him, some constrains to facilitate market accessibility of the produces were: lack of market information and linkages with buyers; lack of storage and cold chain facilities; high cost of third party organic certification which has to be borne by the farmers after the completion of government’s sponsored programme; high cost of transportation from farm to collection centres and to the market due to hilly terrain; lack of air cargo facility and other logistics in most of the airports in Northeast region, except Guwahati, particularly for the export of fresh vegetables, fruits and floriculture; lack of processing and packaging facilities.

“However, the government is taking up measures to tackle the issues that are prevailing and I assure all support from the Nagaland government to those of you who have come here on this day to explore the prospects of organic food production in our state,” he said.

Advisor to Horticulture department, Mhathung Yanthan said that the state government is in the final stage of introducing the ‘Nagaland State Organic Policy.’

He was optimistic that the discussions and interactions between stakeholders would generate new ideas and tangible recommendations for farmers and organic producers so that the issue of marketing organic produces could be tackled effectively.

The Regional Director of Indian Chamber of Commerce said that Nagaland has the potential and resources to be a well-organised producer as the topology and the landscape is strategically located— surrounded by international borders and have ‘a high opportunity’ to export to neighbouring countries.