Dimapur, Oct. 9: Nagaland is among four Indian states that failed to meet the minimum criteria for full immunisation (75%) of the National Health Mission (NHM), and has thereby not been qualified to receive incentives.

According to the Health System Strengthening-Conditionality Report of States 2018-19, Nagaland, Arunachal Pradesh, Meghalaya and Sikkim have been penalised -20 and hence their performance not assessed for incentives.

The report, which was released on October 8 by the National Health Resource Centre and the Ministry of Health and Family Welfare, is a tool to make the states and union territories (UTS) focus on the urgent as well as long-term health systems reforms which would help in achieving better health outcomes. The conditionality framework is based on select outcomes, outputs and a few process indicators which could be objectively verified through various data sources and state reports. 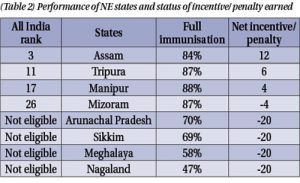 The indicators have been kept uniform for all the 36 states/UTs (except a lower threshold for EAG/hilly states/UTs in a few cases). Various states in India are at various stages of progress and same conditionalities may not be a true reflection of their requirements and progress, it said.

For the year 2018-19, 20 states/ UTs were able to earn incentives, two states/ UTs have earned neither incentive nor penalty, while remaining states received penalty. The maximum incentive earned by any state/ UT is 14 and the maximum penalty given is -12 (excluding the four non eligible states)

Among the north-eastern states, four states could not meet the eligibility criteria while three states earned incentives. (Refer table 2)

The report further stated that the country was able to achieve the target of 15,000 HWCs by March 31 2018 due to constant monitoring and implementation drives conducted by the states. Daman and Diu among the UTs and Punjab among the states achieved the highest percentage in terms of operationalisation of HWCs while Odisha showed the highest achievement among the EAG states.

Under the mental health programme as per the guidelines, five out of the 36 states/ UTs: West Bengal, Jammu and Kashmir, Andaman and Nicobar Islands (all received -5), Bihar and Nagaland (both received -3) were penalised for failing to achieve the set benchmarks.

“The conditionalities and the associated incentive /penalty is to generate a discourse among all stakeholders, so that health becomes a priority for all. This is an effort to start a discussion which is about output, outcome and long-term health sector reforms to sustain the progress made. Developing a framework which reflects the ground reality and actual steps to be taken, is an iterative process, where we keep learning each year and improve thereafter,” the report said.