47 gazetted officers were prosecuted by Vigilance 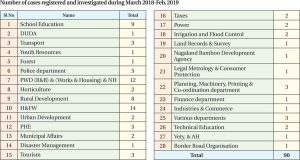 Eastern Mirror Desk
Dimapur, Oct. 9: According to the Nagaland Vigilance Commission the number of complaints for corruption has come down—but the amount of embezzled money has increased. Embezzlement has increased from a few thousands of rupees to several crore of rupees during the period March 2018 to February 2019, updates stated.
So far, the commission stated, the number of persons who had been penalised or convicted were 53. 47 of them were gazetted officers while six were non-gazetted employees, updates stated.

This was stated by the department of Personnel and Administrative reforms in its administrative report.
The Vigilance Commission is in the process of developing its own website to make information available to citizens and also to enable them to register complaints online for speedy investigation into corruption cases, the report stated.

The disciplinary authorities, it stated, must ensure integrity of government servants working in their respective establishment. They are advised that they do not depend solely on the vigilance commission and anti-corruption agencies to check complaints of corruption, misconduct and misdemeanour of public servants for offence when discharging their duties.

It maintained that the number of persons who had been penalised or convicted were 53, out of which 47 were gazetted officers and six were non-gazetted employees.

Two persons are stated to have been terminated from service; three cases of incomplete work or abandoned projects were completed after investigation, while 53 persons were served with administrative warnings, the updates stated.